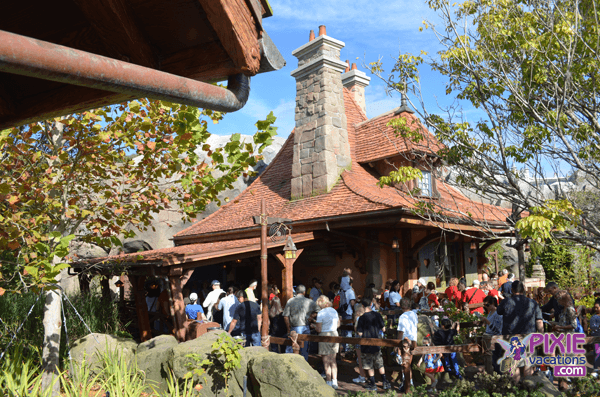 LAKE BUENA VISTA, Fla. – Even more magic is in store for Walt Disney World Resort guests in 2013. From the excitement of New Fantasyland to new tres francais additions to Epcot dining, from being grandly pampered at a new Grand Floridian spa to weekly guest surprises only Disney can do – all this and more welcomes guests in 2013.

In the shadows of Cinderella Castle rises New Fantasyland, welcoming Magic Kingdom guests into classic storybook worlds where elephants fly and castles touch the sky, where a beauty meets a beast and a mermaid plays under the sea.

Representing the largest expansion in Magic Kingdom history, Fantasyland doubles in size with the addition of Enchanted Tales with Belle, Under the Sea ~ Journey of the Little Mermaid, Be Our Guest Restaurant, a re-themed Barnstormer Featuring the Great Goofini, two carousels of Dumbo, the Flying Elephant (complete with interactive queue), Gaston’s Tavern, Pete’s Silly Sideshow, a new family play area and much more.

Here’s a look around what 2013 holds for guests to Florida’s Vacation Kingdom:

Even More New Fantasyland to Debut in 2013

On top of the flurry of those December 2012 grand openings in the expanded New Fantasyland, 2013 sees another new addition to the pixie-dusted lineup. Disney princesses including Cinderella, Tiana and Rapunzel will have a new home for meeting their loyal subjects when Princess Fairytale Hall opens in 2013 in the shadows of Cinderella Castle. The castle-like entrance will feature walls of stone and stained glass windows leading to a large, high-ceilinged room where portraits of the princesses adorn the walls. When summoned, Magic Kingdom guests will proceed to elegantly furnished chambers to meet the princesses. Another coming attraction, Seven Dwarfs Mine Train — a first-of-its-kind coaster with ride vehicles that swing back and forth — makes its debut in spring 2014.

Disney Parks guests will get an extra dash of pixie dust in 2013 with Limited Time Magic. Themed weekly surprises and special offers will surprise and delight Disney Parks guests with 52 weeks of the unexpected. Plans include everything from dance parties, new festivals and character meet and greets to culinary treats, special entertainment and commemorative keepsakes. The bicoastal offering — created to remind guests about the importance of family vacation time together — is full of unique, magical, memory-filled experiences – all available for a limited time only.  Special experiences include Valentine’s week with enchanting dinners, or photo shoots with famous Disney character couples; a patriotic salute during July 4th week with red, white and blue lights adorning castles on both coasts and limited edition souvenirs; or the popular Dapper Dans barbershop quartet swapping their old-time melodies for surprise renditions of today’s boy band hits. Each Limited Time Magic offering will have a varying length from a day to a week to a season adding to the element of surprise.

Bernard and Shirley Kinsey Collection Comes to Epcot in 2013

The American story of determination, courage, hope, struggle and inspiration will be told through more than 40 pieces of art, artifacts, books sculptures and documents on display at Epcot. The American Adventure Pavilion will be home to the Kinsey’s personal treasures of African-American art and history, amassed from their travels to 90 countries with some works dating to the 17th century. The Kinsey Collection is the intersection where art and history meet, a virtual history book opened wide, giving voice to untold stories of accomplishment and contribution. After previews during African-American Heritage Month in February, the Kinsey Collection is scheduled to open in March 2013. The Kinsey Collection, at the American Heritage Gallery, will be included in Epcot admission.

Pirates of the Caribbean: The Legend of Captain Jack Sparrow is a new experience now on view at Disney’s Hollywood Studios, giving Walt Disney World Resort guests a chance to become immersed in the action and adventure of the four “Pirates of the Caribbean” films. Aspiring buccaneers journey deep into an eerie lost grotto, where a mysterious pirate skull puts them to the test to see if they have what it takes to set sail with Captain Jack’s crew. Along the way, they must face all the perils of a pirate’s life as their favorite moments from the films come to life. State-of-the-art technology brings the pirate’s life to guests, including an epic ship-to-ship battle. The attraction is included with theme park admission and is located in Soundstage 4 near Pixar Place.

If the new year means a new you, the just-opened Senses – A Disney Spa at Disney’s Grand Floridian Resort welcomes Walt Disney World Resort guests to renew and rejuvenate in 2013. The newly-remodeled spa, owned and operated by Disney, blends Grand Floridian Victorian elegance with modern touches – plus a dash of Disney whimsy.

All the senses are engaged in an ultimate relaxation experience – flavorful and soothing elixirs, color variations in lighting and Disney orchestral music harmonize with the treatment selected. Spa-goers walk through the new Victorian-style entryway and indulge in the spa’s relax, renew, or imagine themes aimed at creating a custom experience. The centerpiece of the spa’s lobby is an original mural reflecting old Florida landscape and nature. Glass mosaic tiles in the Jacuzzi rooms further enhance the elegance and sophistication of the spa.

Guests can book a spa appointment at the new Senses – A Disney Spa at Disney’s Grand Floridian Resort by calling 407-WDW-SPAS (407-939-7727) or learn more by visiting www.disneyworld.com/spas

Disney Junior – Live on Stage! at Disney’s Hollywood Studios and Disney California Adventure is periodically updated to feature the latest, most popular characters and stories from the Disney Junior line-up on television. In 2013, the top-rated “Doc McStuffins” and “Sofia the First” join the show. The new version of Disney Junior – Live on Stage! debuts at Disney’s Hollywood Studios in mid-February and comes to Disney California Adventure one month later, in March 2013. “Sofia the First” as a regular series premieres Friday, Jan. 11, on Disney Channel and Disney Junior.

The Drew Brees Passing Academy and Tournament, a four-day football camp and 7-on-7 event for high school players, makes its debut at the ESPN Wide World of Sports Complex, June 27-30, 2013. Brees, the New Orleans Saints’ All-Pro quarterback, and other NFL stars will provide insider tips and hands-on training on the art of the passing game as well as offer three days of highly-competitive 7-on-7 competition. For more information go to www.ksaevents.net

Starbucks will be opening locations at Disney theme parks at the Walt Disney World Resort and Disneyland Resort. The first two Walt Disney World locations will open in 2013. At Magic Kingdom, Main Street Bakery will close for refurbishment in January 2013. When it reopens in early summer, Main Street Bakery will keep its name and theming and continue to serve Disney favorites like cookies, brownies and seasonal cupcakes, in addition to Starbucks signature beverages and other menu items. At Epcot, Fountain View will temporarily close in March 2013. When Fountain View reopens in midsummer, it will serve Starbucks products. Each Starbucks location inside a Disney Park will reflect the theme of its surroundings. At Magic Kingdom Park for example, Cast Members will wear a costume consistent with the early 20th century look and feel of Main Street, U.S.A. At Future World in Epcot, the new Starbucks location and Cast Member costumes will be designed to match the park’s futuristic theme.

The white sand beaches and azure waters of Castaway Cay, Disney’s private island, take center stage in the early half of 2014 voyages for Disney Cruise Line.  With all four Disney ships sailing from Florida ports, not only will guests have more options to visit Castaway Cay, but they may combine their cruise with a visit to Walt Disney World Resort and experience the expanded Fantasyland at Magic Kingdom.

In the early part of 2014, the Disney Magic will return to Port Canaveral, Fla., joining the Disney Dream and Disney Fantasy, while the Disney Wonder will homeport in Miami. During this time, guests will have more opportunities than ever to enjoy a Disney cruise that visits Disney’s private island in the Bahamas reserved exclusively for Disney Cruise Line guests, Castaway Cay.

Caribbean and Bahamas from Port Canaveral

To learn more about Disney Cruise Line or to book a vacation, guests can visit http://www.pixievacations.com, call Pixie Vacations at 678-815-1584.