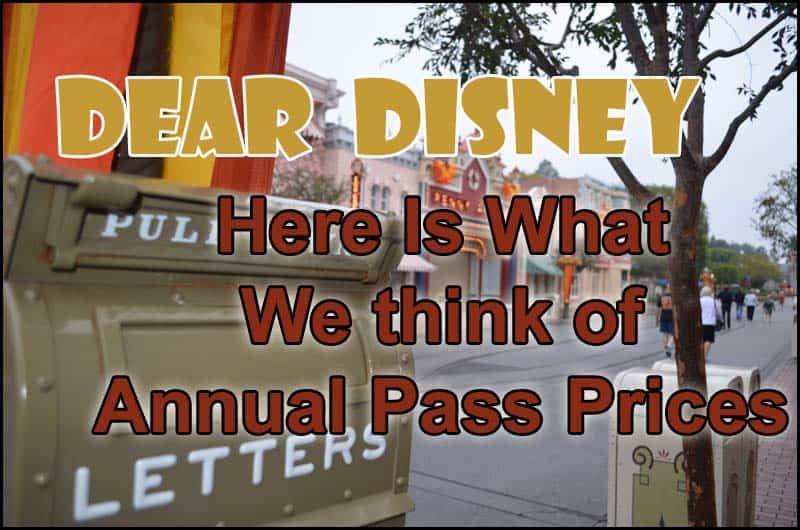 Prices are going up at Walt Disney World and Disneyland for Annual Passes.  When the price of milk goes up, nobody cares, but when Disney increases prices, it’s time to bring on major debates.

Listen to our show on Disney Annual Passes and Tables in Wonderland. Click the Play button below or subscribe to us on iTunes.

Arguments for why Disney Annual Passes should not go up:

Tables in Wonderland Prices go up

To cover the purchase price of your Disney Tables in Wonderland Card you now need to spend $750 in one year at Walt Disney World in food.  That is the break even point.

Tables in Wonderland TIP: One Quick Service Disney Dining Plan Credit can be traded in for three Disney Snack Credits at ONE Epcot International Food and Wine Festival booth.  So you can get Three items at one Epcot kiosk (No Alcohol) for one Disney Quick Service Credit.  Make sure you do the math and get three expensive items if you can to get the best value out of your Disney Dining Plan Quick Service credits.

Should you buy a Tables In Wonderland Card?  The math is simple.  If you are going to spend OVER $750 in one year at Table Service Dining at Walt Disney World.  Then YES it will save you money.  The discount with Tables in Wonderland is 20% at tabel service locations and that INCLUDED Alcohol.  There are a few restaurants that do not take the Tables in Wonderalnd card and there are some black out dates.  So check the list.

$175 for Florida Residents
$150 for Annual / Seasonal Passholders and Disney Vacation Club Members
Add a second membership for your spouse or partner for only $50 more!

To purchase a Tables in Wonderland membership, visit Guest Relations, located at all four Theme Parks and Disney Springs.
You must be 21 years old or older to purchase.