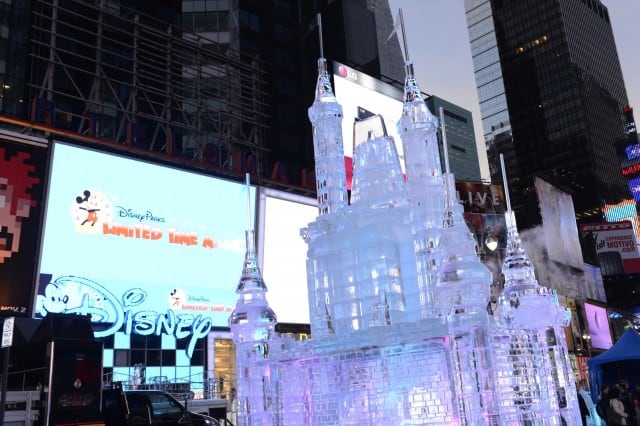 While 2013 is already a momentous year for Disney Parks – with New Fantasyland as the largest expansion in Magic Kingdom history at Walt Disney World Resort and the first full year of a reimagined Disney California Adventure at Disneyland Resort – Disney today unveiled Limited Time Magic: 52 weeks of magical experiences big and small that appear, then disappear as the next special surprise debuts.

Imagine an Independence Day celebration – only it lasts an entire week…. Main Street mainstays the Dapper Dans rocking out with boy band hits in barbershop style….a Friday the 13th dance party with Disney villains that lasts to the 13th hour…. a Valentine’s Day in 2013 that becomes Valentine’s Week with Disney castles blushing pink, surprise meet-and-greets with Disney princes and princesses, and candlelit dinners for couples in love.

These and many more special experiences to surprise and delight Disney Parks guests will roll out each week in 2013. Unique, magical, memory-filled – and each for a limited time only.

Disney officials noted that Limited Time Magic was inspired by the reality that many of life’s most cherished memories are made during those special, but fleeting moments when families spend time together with shared experiences.

As part of today’s announcement, Disney Parks illustrated the whimsical and short-lived nature of Limited Time Magic by unveiling a glistening, three-story fairytale castle in the heart of Times Square. Made of 45,000 pounds of ice, the castle was available only for a limited time, thanks to Mother Nature and warming autumn temperatures.

Here’s a sampling of Limited Time Magic in store for guests in 2013 — for a limited time only:

True Love: Celebrate romance and enchantment throughout Valentine’s Week with special moments and entertainment geared to lovebirds. Guests can celebrate their Valentine as Magic Kingdom and Disneyland turn up the romance, complete with their iconic castles bathed in hues of red and pink. Disney Princes join their Princesses to meet park guests in special settings, prix fixe menus turn up at select restaurants and Valentine collectibles will be offered for the week.

Independence Week: It’s red, white and blue as Disney Parks salutes America with a 4th of July Fireworks Party — for an entire week, with patriotic lighting bathing the Disney castles on both coasts. Mickey Mouse appears in his patriotic finest and guests will find special USA shirts, Ear Hats and other limited-edition souvenirs.

During “Long Lost Friends Week,” lesser-known Disney characters will move from the shadows to the spotlight with meet-and-greets on both coasts. Photo opps with characters that could include Flik, Clarabelle Cow, Remy, Tweedle Dee and Tweedle Dum will surprise and delight guests. And Disney guests will even have the chance to vote online for which characters they want to see.

Pirate Week: Why talk like a pirate one day when you could celebrate these scalawags all week long? The adventures of Jack Sparrow come to life like never before during a bicoastal buccaneer bash in which Disneyland and Walt Disney World become pirate-palooza: pirate bands, pirate meet-and-greets and more.

Dapper Dans Sing Boy Bands: Dapper Dans, the iconic quartet from Main Street, U.S.A., will add a special finale to their show, claiming the title of the “Original Boy Band” and delivering a medley of hits from One Direction, *NSYNC and the Backstreet Boys.

Unleash the Villains: A Friday the 13th in 2013 is a special day, so Disneyland and Disney Hollywood Studios are staying open until the 13th Hour (1 a.m.). Maleficent, Capt. Hook, Jafar and other Disney villains host a dance party, complete with limited-edition collectibles and nighttime mischief on Sept. 13.

Golden Horseshoe Revue: The fabled Frontierland show returns to Disneyland for one month only, bringing back the corny jokes and enduring songs that were often enjoyed by Walt Disney himself.

Disney dream makers are crafting more surprises and magical offers that will be rolled out weekly during the magical year. The experience of the week will be announced in a variety of ways including in-park, Disneyworld.com, Disneyland.com, Facebook, Twitter, the Disney Parks Blog – adding to the element of surprise.

Hours 6 a.m.-Noon on Wednesday, Oct. 17
The ice castle stands 25 feet tall, 9 feet deep and 15 feet wide.
It was created using 45,000 pounds of ice – 267 blocks of ice in all.
The castle was first assembled into 37 pieces, then boxed and driven to Times Square to reassemble.
Each of the 37 pieces was lifted into place by a 15-ton crane.
Construction took 12 hours as craftsmen worked around the clock to erect the castle.
Six additional ice vignettes surround the castle representing precious moments in time – a grandparent with a child, a child donning Mouse ears, a family taking a portrait, a balloon vendor and more.
Mickey and pals Minnie, Goofy, Pluto, Cinderella and Merida, from the Disney-Pixar film “Brave,” joined in the morning celebration.