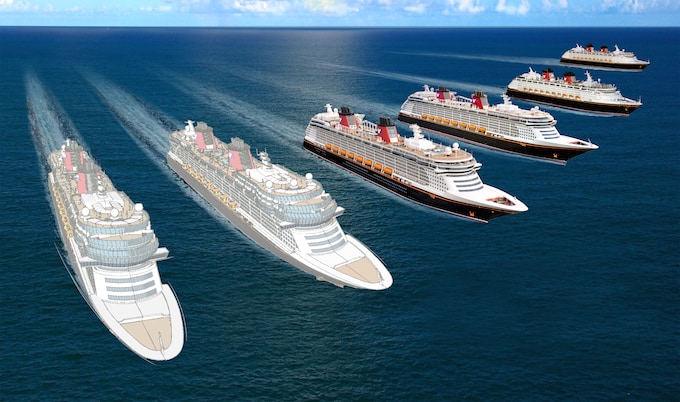 Disney Cruise Line announced two new cruise ships coming to it’s fleet of four existing Disney cruise ships.  If you have tried to book the Disney Wonder, Disney Magic, Disney Fantasy or the Disney dream for a cruise vacation, you know all to well that it can be difficult to even find a stateroom.  But cruise ships take a long time to build so you will have to put off a future Disney Cruise Vacation on one of these two new Disney cruise line ships until at least 2021.

Disney Cruise Line is proud to announce plans today to build two additional cruise ships, each of them showcasing the immersive family entertainment, enchanting storytelling and unparalleled service that only Disney can deliver.

The new ships, each approximately 135,000 gross tons with about 1,250 guest staterooms, will be slightly larger than the Disney Dream and Disney Fantasy. These new vessels will be built at the Meyer Werft shipyard in Germany, and be completed in 2021 and 2023.

While design plans, ship names and itineraries are still in development, the Walt Disney Imagineering team is already dreaming up exciting new ways to create the world’s most magical oceangoing adventures.