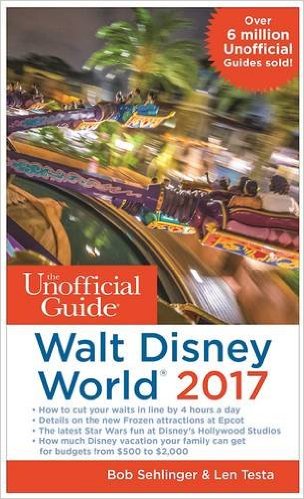 Even if you’re not planning a trip to Disney World any time soon, a good book can let you dream about your next trip or relive your last one. Here’s a list of my favorite Disney World guide books: 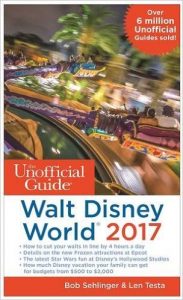 The Unofficial Guide is, without question, one of the best Disney travel guides available. At a little under 900 pages, The Unofficial Guide is filled with everything you need to plan a great Disney vacation: Advice on when to travel, weather, and special concerns for people who may have difficulties travelling; restaurant reviews and descriptions of all the Disney table service restaurants as well as off-site locations; information on Disney hotels, including surprising details such as which resort is the most quiet and which rooms offer the best views; pointers on getting around on Disney property and off-site; detailed descriptions of attractions; and well, just about anything you could think of asking, it’s been asked and answered in this book. I know that probably sounds like hyperbole, but there’s a reason that Disney fans regard The Unofficial Guide as indispensable.

It also has Touring Plans, which even in this day and age of Fastpass+, are great for those visiting Disney during busier times of the year. I’d recommend this book to anyone going to Disney World, both first-time travelers and the Disney-obsessed. In fact, I’ve been known to steer total strangers in the bookstore toward it.

Yes, I’m a nerd. But you already knew that.

The authors don’t sugarcoat Disney. If they have a bad experience at a hotel or a restaurant, it will be reflected in the book. For this, they’ve received some criticism, but they are also clearly fans who love Disney and have a lot of respect for the creativity and work that goes into running a place like Walt Disney World. I think the fact that the writers are true fans separates this book from other Disney guides, such as Fodors and the like.

The Unofficial Guide comes out every year in the fall. Updates are added yearly, but some things will be the same from year to year. You don’t technically need to buy a new one every year, but owning one does give you free or reduced access to their website (which you can pay for without purchasing the book), which in turn allows you to access their crowd control calendar and other information. I don’t plan a trip without looking at their calendar, which I’ve found to be very accurate. You can find The Unofficial Guide in just about any bookstore. 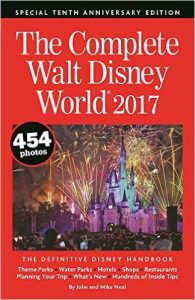 If the Unofficial Guide is more information than you want to wade through, try  The Complete Walt Disney World. Unlike The Unofficial Guide, which has a few pictures in the beginning of the book, The Complele WDW has photographs on every page. It includes maps of the parks, as well as on-site hotel and restaurant descriptions; there are a few very brief descriptions of off-site hotels. The strongest part of The Complete WDW is that they describe each ride in detail and in some cases, give you the history of the ride or tell you how it was built. There are also descriptions of all shows and parades. This book is a great source of Disney trivia as well as practical information.

If the above guides offer great detail on every aspect of Disney World, Bill Burke’s Mousejunkies tells you what if feels like to be at Disney World. There is a lot of practical information in this book, but where this book is strongest is in sharing with the reader the experiences that he and his co-authors have had at Disney: the good, the bad, and the occasionally bizarre. Burke is really good at answering questions you might not have thought about asking and he is pretty funny while doing it; any book that details over several pages the best and worst bathrooms at Disney World is bound to get a chuckle out of even the most stoic among us.
Mousejunkies is more of a travelogue than a true travel guide.

While The Unofficial Guide may give you an overview of each and every table service restaurant on Disney property, this book offers only a handful of descriptions. Instead, what you get here is the story behind the meal and a real sense of how the author and his friends felt about it. He does the same thing with attractions and resorts. Because there are a lot of anecdotal descriptions in Mousejunkes, you don’t get the kind of in-depth detail you get from the guides mentioned above; there’s simply not room for it. For this reason, I wouldn’t recommend this as the only book for a first timer to buy, but I would recommend it as a supplement to one of the above guides; in fact, it’s the one you may read again and again. For those who know their way around Disney, it’s a great way to relive the experience and discover a few secrets you might not already know.